The GOP Is Dying Off. Literally. 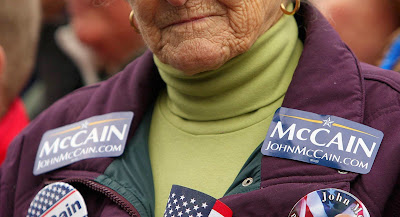 It turns out that one of the Grand Old Party’s biggest—and least discussed—challenges going into 2016 is lying in plain sight, written right into the party’s own nickname. The Republican Party voter is old—and getting older, and as the adage goes, there are two certainties in life: Death and taxes. Right now, both are enemies of the GOP and they might want to worry more about the former than the latter.
Most Popular

There’s been much written about how millennials are becoming a reliable voting bloc for Democrats, but there’s been much less attention paid to one of the biggest get-out-the-vote challenges for the Republican Party heading into the next presidential election: Hundreds of thousands of their traditional core supporters won’t be able to turn out to vote at all.

The party’s core is dying off by the day.

Since the average Republican is significantly older than the average Democrat, far more Republicans than Democrats have died since the 2012 elections. To make matters worse, the GOP is attracting fewer first-time voters. Unless the party is able to make inroads with new voters, or discover a fountain of youth, the GOP’s slow demographic slide will continue election to election. Actuarial tables make that part clear, but just how much of a problem for the GOP is this?  READ MOREhttp://www.politico.com/magazine/story/2015/05/the-gop-is-dying-off-literally-118035.html?utm_source=digg&utm_medium=email#.VVn_lEaVWSp