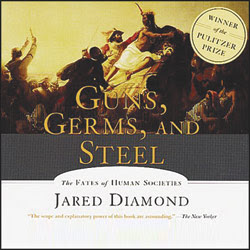 In making his controversial argument that “culture” was the main reason Israelis were wealthier than Palestinians, Mitt Romney cited two authors who had written major works on the wealth of nations, Daniel Landes and Jared Diamond. The latter took to the New York Times op-ed page on Thursday to clear the record, saying Romney’s account of his argument was wildly inaccurate. While Romney saw Diamond as arguing that “physical characteristics of the land” like iron deposits were the key determinants of a nation’s success, Diamond’s book Guns, Germs, and Steel instead emphasizes water access, local plant and animal life, and geographical features like latitude as being determinative. Diamond calls Romney’s interpretation “so different from what my book actually says that I have to doubt whether Mr. Romney read it.”

But, in Diamond’s view, this misrepresentation isn’t “the worst part.” Rather, it was his reduction of an immensely complex subject to a simplistic, one-word explanation:

Even scholars who emphasize social rather than geographic explanations — like the Harvard economist David S. Landes, whose book “The Wealth and Poverty of Nations” was mentioned favorably by Mr. Romney — would find Mr. Romney’s statement that “culture makes all the difference” dangerously out of date. In fact, Mr. Landes analyzed multiple factors (including climate) in explaining why the industrial revolution first occurred in Europe and not elsewhere.
READ MORE
Posted by Obwon at 8:52 AM No comments:

On Tuesday night, Rep. Todd Akin (R-MO) wrapped up his state’s Republican Senate nomination, defeating two other Tea Party Republicans in a race that split the GOP’s hard right faction. Akin’s highest profile backers were former Arkansas Gov. Mike Huckabee and Rep. Michele Bachmann (R-MN), which should be no surprise — Akin has a long history of taking inflammatory, extremist positions, particularly with respect to religion and equal rights for gays and lesbians:

2. Akin said that “the heart of liberalism really is a hatred for God.”

3. Akin is one of the most anti-gay GOP members of the House.

5. Akin wants the United States to withdraw from the UN.

READ MORE
Posted by Obwon at 8:46 AM No comments:

The group behind the Nuns On A Bus tour that highlighted the ill-effects of the House Republican budget in congressional districts across the country is now setting its sights on the party’s presidential candidate, inviting Mitt Romney to spend a day with the nuns to learn about the plight of America’s poorest citizens.
NETWORK, a national Catholic social justice lobby, is inviting Romney to “spend a day with Catholic Sisters who work every day to meet the needs of struggling families in their communities,” according to a release. The group is specifically targeting Romney a day after his campaign released a misleading ad about welfare reform that Sister Simone Campbell, NETWORK’s executive director, said “demonize[s] families in poverty” and shows Romney’s “ignorance about the challenges” the poor face in America:


“Recent advertisements and statements from the campaign of Governor Romney demonize families in poverty and reflect woeful ignorance about the challenges faced by tens of millions of American families in these tough economic times,” stated Sister Simone Campbell. “We are all God’s children and equal in God’s eyes. Efforts to divide us by class or score political points at the expense of the most vulnerable of our brothers and sisters reveal the worst side of our country’s politics.”   READ MORE

George Zimmerman, 28, charged with the murder of unarmed teenager Trayvon Martin, will seek to have second-degree murder charges dismissed under Florida's 'stand your ground' law, his attorney said on Thursday.

If successful in securing a hearing under the law, it could result in the dismissal of all criminal charges against the man accused of killing Martin.

The hearing, which is not expected to take place for several months, will involve evidence collected by prosecutors as well as expert testimony from both sides. Accoring to the New York Post, legal experts believe that Zimmerman himself will testify since he is the sole survivor of the February 26 confrontation.

'Most of the arguments, witnesses, experts and evidence that the defense would muster in a criminal trial will be presented in the 'stand your ground' hearing,' a statement posted on Zimmerman's official defense website said.

Under the controversial Florida law, Circuit Judge Kenneth Lester could dismiss the charges if Zimmerman conclusively shows he shot Martin because he 'reasonably believed' he might be killed or suffer 'great bodily harm' at the hands of the unarmed teenager.    READ MORE

Thanks to a new law privatizing public education in Louisiana, Bible-based curriculum can now indoctrinate young, pliant minds with the good news of the Lord—all on the state taxpayers' dime.
Under Gov. Bobby Jindal's voucher program, considered the most sweeping in the country, Louisiana is poised to spend tens of millions of dollars to help poor and middle-class students from the state's notoriously terrible public schools receive a private education. While the governor's plan sounds great in the glittery parlance of the state's PR machine, the program is rife with accountability problems that actually haven't been solved by the new standards the Louisiana Department of Education adopted two weeks ago.

For one, of the 119 (mostly Christian) participating schools, Zack Kopplin, a gutsy college sophomore who's taken to Change.org to stonewall the program, has identified at least 19 that teach or champion creationist nonscience and will rake in nearly $4 million in public funding from the initial round of voucher designations.


Read about Bobby Jindal's exorcism problem.
Many of these schools, Kopplin notes, rely on Pensacola-based A Beka Book curriculum or Bob Jones University Press textbooks to teach their pupils Bible-based "facts," such as the existence of Nessie the Loch Ness Monster and all sorts of pseudoscience that researcher Rachel Tabachnick and writer Thomas Vinciguerra have thankfully pored over so the rest of world doesn't have to.
Here are some of my favorite lessons:

1. Dinosaurs and humans probably hung out: "Bible-believing Christians cannot accept any evolutionary interpretation. Dinosaurs and humans were definitely on the earth at the same time and may have even lived side by side within the past few thousand years."—Life Science, 3rd ed., Bob Jones University Press, 2007   READ MORE