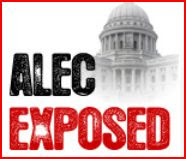 The American Legislative Exchange Council (ALEC) has a way of trying to "solve" problems where none exist. Right now in Wisconsin, the group is dipping its fetid toe into the issue of bail bonding. It's supporting an effort to have the state move away from its publicly-run system to one that relies on private bail bondsmen.

Why does ALEC care, you may ask? Surely it has nothing to do with its 20-year relationship with the private bail bond industry, right? Wrong. Assembly Speaker Robin Vos (R-Rochester) is carrying ALEC's water on the issue after a similar effort in the state failed two years ago. The end goal is more dollars for private bail bondsmen.

The big losers with this legislation are everyone else.  First, there are the impoverished low-level offenders who will not be able to afford even minimal bail amounts. Under the current system, they pay 10 percent of the bail amount to be let free before their court date, but receive that money back if they show up. Under a private system, however, they will not be reimbursed. So while they might be able to borrow their bail amount from someone for a short period of time, they may not be able to get someone to permanently cover those costs.

There is also the issue of the taxpayer. More jail time means more dollars needed to cover the housing and food costs of those behind bars. And it may even result in needing to have more cells built to house them. Bruce Murphy of Urban Milwaukee fills us in:

Chisholm said that bail bond agents often set up payment plans with high interest rates that “resemble the predatory practices of the cash loan industry” and trap low-income individuals into a cycle of debt. READ MORE

Immigrants Have Cantaloupe Calves, and 4 Other Unhinged Comments from America’s Lunatic Right-Wing Fringe This Week

We hope Rep. Steve King likes cantaloupe, because his office received hundreds from the immigrants and supporters he offended.

Rep. Steve King (R – Iowa)
You know you’re pretty far out on the rightward flank of the right wing, when Speaker of the House John “repeal all laws” Boehner and Rep. Paul “slash all social programs” Ryan (R-Wisc.) publicly denounce your comments, but such was the accomplishment of Iowa Rep. Steve King this week. In the past, King has compared immigrants to both dogs and livestock, but this week he went with a fruit metaphor. You see he is just really tired of all the claims that sometimes undocumented immigrants and especially their children achieve things, contribute to and are actually good for a country founded by, well, undocumented immigrants.
“For everyone who’s a valedictorian, there’s another 100 out there that weigh 130 pounds and they’ve got calves the size of cantaloupes because they’re hauling 75 pounds of marijuana across the desert,” King notoriously said.READ MORE
Posted by Obwon at 10:24 PM No comments:

We already talked about the Amash Amendment being voted down very narrowly (217 - 205). While it didn't pass, this was still a huge victory, because a few weeks ago (hell, even last week) people predicted that this amendment had no chance at all and might not even be debated. To come within seven votes of passing shows you why the NSA, the White House and the Senate's primary NSA enablers went absolutely ballistic in going all out against the amendment. Think about that: you had incredibly powerful interests working overtime against this amendment, and no special interests beyond basic common decency and grassroots support working for it... and the vote was still incredibly close.

READ MORE
Posted by Obwon at 10:07 PM No comments:

Dave Johnson, Campaign for America's Future
Johnson writes: "Imagine a political party that would hurt the public, the economy and the country so they could say in the next election, 'Hey look at how the country is hurting, vote for us instead.' That could never happen here, could it?"
READ MORE
Posted by Obwon at 9:37 PM No comments: