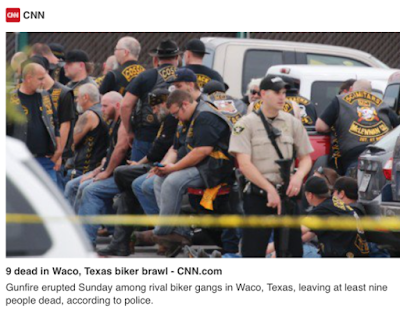 Nine people shot to death at a family restaurant.
Dozens of others stabbed, beaten, and seriously injured.
Over 100 guns recovered.
Sounds like one of the worst crimes in modern American history, right?
Then why do the men above look like they are tailgating? Smoking cigarettes, others using their cell phones, nobody in the world could guess that these men were even associated with such a horrible crime. Instead, you'd think the man below was involved.
[...]
Nah. He refused to get on the sidewalk during a curfew in Baltimore. Sprayed in the face with pepper spray, the officers even seemed to enjoy brutalizing him. See the smile?
It's not a harsh comparison at all.

In Ferguson, Baltimore, New York, and around the country, protestors were actually protesting against violence and were often treated as if they were murderers.

In Waco, Texas, when one of the deadliest, bloodiest, most violent rampages in modern America happened, the National Guard wasn't called in, the perpetrators weren't beaten or pepper-sprayed, nobody was hogtied or humiliated, the dogs weren't brought out to intimidate anyone. Hell, they didn't even handcuff them or take their phones away. Instead, they just sat them down on the sidewalk peacefully.  READ MORE

Email ThisBlogThis!Share to TwitterShare to FacebookShare to Pinterest
Labels: Waco and Race