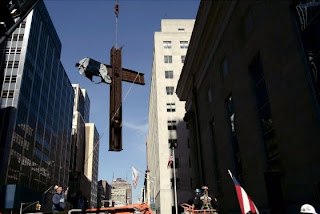 The cross is moved in 2006 from ground zero to nearby St. Peter's Church, where it had rested until this month.Photo: New York Daily News Archive, via Getty Images

A cross of steel beams that remained among the rubble of the World Trade Center after the 9/11 attacks, and which became a beacon of hope for Christian rescue workers and mourners, has now become a symbol of controversy after organizers decided to include it in the National September 11 Memorial and Museum at ground zero. An atheist group, the New Jersey-based American Atheists, has filed a lawsuit objecting to the Christian imagery, saying its inclusion "constitutes an unlawful attempt to promote a specific religion on governmental land." Much like the lawsuit against the city's decision to rename a Red Hook street "Seven in Heaven Way" (after the seven local firefighters who died on 9/11), the legal action over the rubble cross probably isn't going to win the atheism movement many new friends, or a broader acceptance.

That made us wonder how prominent atheists — atheist evangelists, you might call them — felt about the lawsuit. Did they agree with it? Is this the kind of thing that atheists should make a fuss over? So we asked a number them to weigh in. Well, only Bill Maher got back to us. Here's what he said:

The news from Norway reminds us that Christianity is also a religion with a bloody history, and perfectly capable of creating dangerous, violent extremists just as Islam does. Once you buy into the idea of things that are "holy", you're closer to buying into the idea of a "holy war." Anders Breivik was a terrorist calling for a Christian war against Muslims. In this atmosphere, symbols about whose god "rules" are not helpful.