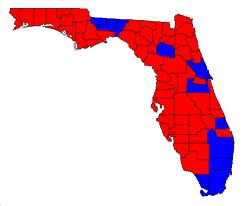 You remember, Florida, right? Land of the hanging chad? A state in which a margin of several hundred votes could determine the outcome of a presidential election — that is, of course, if the U.S. Supreme Court allows the votes to be counted.


ThinkProgress’ Judd Legum today has a disturbing report from the Sunshine State:
According to the Broward County Supervisor of Elections, eligible voters will be removed from the voting rolls as a result of the massive voter purge ordered by Governor Rick Scott. “It will happen,” Mary Cooney, a spokeswoman for the Broward County Supervisor of Elections, told ThinkProgress.
[…]

That process produced a massive list of 182,000 names, which [then Secretary of State Kurt] Browning considered unreliable. The Fair Elections Legal Network, which is challenging the purge, noted that database matching is “notoriously unreliable” and “data entry errors, similar-sounding names, and changing information can all produce false matches.” Further, some voters may have naturalized since their driver’s license information was collected.  READ MORE
Posted by Obwon at 10:32 AM