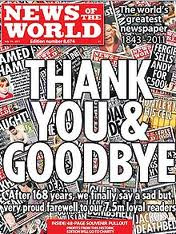 By Tim Castle and Georgina Prodhan

LONDON — British police arrested four current and former staff of Rupert Murdoch's best-selling Sun tabloid plus a policeman on Saturday as part of an investigation into suspected payments by journalists to officers, police and the newspaper's publisher said.

News Corp.'s Management and Standards Committee, set up in the wake of the phone hacking scandal, said Saturday's operation was the result of information it had passed to police.

"News Corporation made a commitment last summer that unacceptable news gathering practices by individuals in the past would not be repeated," the committee said in a statement confirming the arrests of four "current and former employees" of the Sun. READ MORE
Posted by Obwon at 5:16 AM