Rove v. Trump: The Unlikely War for the Soul of the GOP 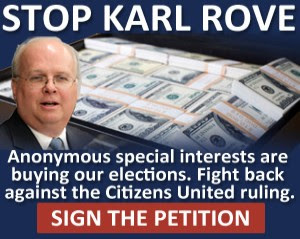 Bush's architect attempts to wrest back control of the party from a man simply out to make a buck.
December 6, 2011
Newsmax, a nutritional supplement sales organization and expensive email list with a right-wing news website attached, is hosting a Republican presidential debate, “moderated” by fictional television clown tycoon Donald Trump, set to air on a television channel you probably don’t actually know you have that spends most of the broadcast day airing paid programming. Historical fiction author Newt Gingrich — a disgraced serial adulterer with a still-unexplained $500,000 credit line at Tiffany and Co. who is also for some reason the current frontrunner for the party’s nomination — could not be happier. For some crazy reason, Republican campaign strategist Karl Rove is not particularly thrilled with all of this.
READ MORE
Posted by Obwon at 5:54 AM