IT IS CONCLUSIVE - 9/11 AIRCRAFT AIRBORNE WELL AFTER CRASH 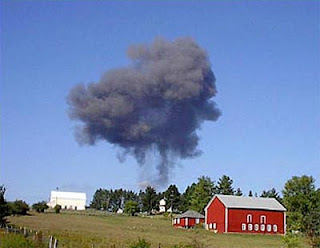 UNITED 93 IN THE VICINITY OF FORT WAYNE, INDIANA AND CHAMPAIGN, ILLINOIS AT TIME OF SHANKSVILLE ALLEGED CRASH

(PilotsFor911Truth.org) 12/06/11 - More information has surfaced which conclusively demonstrates the aircraft reportedly used on 9/11, were airborne well after their alleged crashes. This article supplements our last, "ACARS CONFIRMED - 9/11 AIRCRAFT AIRBORNE LONG AFTER CRASH" in which the ACARS system is explained as well as how to determine if a message were received by the aircraft, along with how ground stations are selected through Flight Tracking Protocol based on messages routed to United 175, N612UA. We now have further evidence which places United 93, N591UA, in the vicinity of Champaign, IL, 500+ miles away from the alleged crash site in Shanksville, PA. This information is further corroborated by a (now former) United Airlines Manager of Flight Dispatch Michael J. Winter. read more...
Posted by Obwon at 8:25 PM

Email ThisBlogThis!Share to TwitterShare to FacebookShare to Pinterest
Labels: 9-11 flight 93 airborne after crash