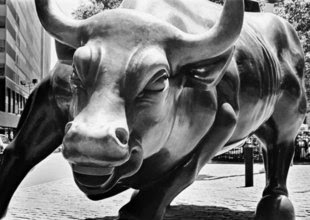 Home loans didn't bring on the recession; gimmicky financial instruments bloated to 100 times their value are what caused all this pain.
December 4, 2011
Wall Street turned a few million home-loans into what Warren Buffet called "economic weapons of mass destruction," cratered the global economy and then, when the bubble burst, turned around and insisted on a massive bailout courtesy of the American tax-payer.

That rightly infuriated most Americans, but it has nonetheless become something of an article of faith among conservatives that Wall Street bears little blame for the Great Recession. The dominant narrative on the right today is that "big government" is ultimately responsible for the crash. In the words of one of Andrew Breitbart's bloggers, Democratic lawmakers like Barney Frank and Chris Dodd “brought down the banking industry by forcing banks to give loans to people who couldn’t afford them.”

That such a ludicrous claim could gain such wide traction is a testament to the intellectual debasement of modern conservative discourse. No bank was ever “forced” – or coerced or incentivized by the government in any way – to make a bad loan.
READ MORE
Posted by Obwon at 12:59 PM