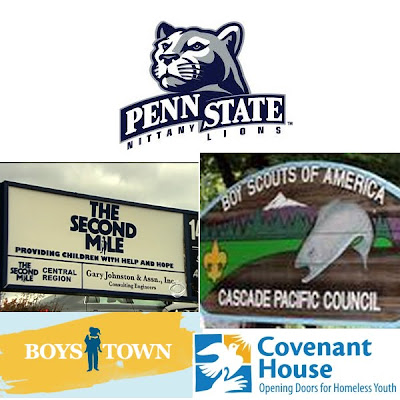 The Penn State allegations may seem unthinkable: revered assistant coach and prominent community activist Jerry Sandusky preying on eight children. But such abuses of trust play out in the USA over and over again. Respected people who set up charitable or social groups for children, only to be implicated in some form of child sexual abuse, are a frightening reality. Washington, D.C., journalist Patrick Boyle, author of the 1994 book Scout's Honor: Sexual Abuse in America's Most Trusted Institution, says reaction to Catholic church sex abuse complaints and those against the Boy Scouts of America were similar. "In both cases, there was a lot of willful ignorance among the higher-ups," he says. "They almost tried not to know things." In the Penn State case, Boyle says, "everybody seems to have done the minimum, instead of doing the maximum or more, which is what we'd expect of these institutions." "If you can give 110% on the field, why can't you give 110% for the victims?"

Note: For powerful evidence that this kind of abuse is much more widespread than expected, click here.

To understand how this relates to secret societies and deep hidden knowledge of our world, click here.
Posted by Obwon at 9:39 AM