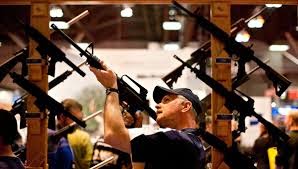 While guns may be be great in churches, schools, universities, bars and sitting in handbags next to toddlers in Walmart shopping carts — the National Rifle Association (NRA) isn’t so keen on guns at their Annual Convention.

The convention (April 10-12 in Nashville) is expected to draw a crowd of 70,000 people.  Naturally all of them are do-gooders — there to ogle, stroke and cling to the “16 acres of guns” (according to an ad for the event).  Among the 555 Exhibitors (according to the NRA’s event website) are Smith & Wesson, SigSauer, Beretta USA and Remington Arms.  So will there be guns? — you betcha.  Will they work? — uh, no.  Sorry, but these guns won’t fire.

According to the security plan that was adopted by the NRA soon after Nashville was chosen to host their annual convention — all guns on the convention floor will be nonoperational with the firing pins removed.  In addition, any guns purchased during the NRA convention will have to be picked up at a Federal Firearms License dealer (near the purchaser’s home) and will require a legal identification (I expect they mean at the time of pickup of said merchandise.)

(See last item on this page.)

Speakers include Bobby Jindal, Jeb Bush (the white one, not the one of hispanic origin), Scott Walker, Mike Pence, Rick Perry, Rick Santorum, Marco Rubio, Ted Cruz, Ben Carson and Lindsey Graham — and of course the perpetually-validation-seeking Sarah Palin and Donald Trump.  And for those with a nostalgia for treason, Oliver North will be making a booth appearance.  Ted Nugent is also scheduled because Freedom is not Free and We the People Must Keep It Alive! Well, true nothing stinks more than dead freedom -- except maybe rank hypocrisy.  READ MORE
Posted by Obwon at 12:48 PM