Thanks, GOP! Michigan Is Now A Theocracy And They're Coming For Your State Next 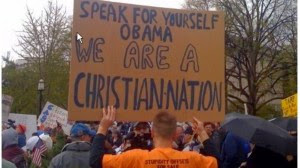 A new religious tyranny act has been fast tracked in Michigan, and is not waiting for the Senate to pass it.

Christian special pleading has hit my home state, and soon, it'll be coming to yours, too, in the wake of the November Republican sweep.

My state was the birth place of the Republican party, back when they were the good guys - back when they were the party of anti-slavery, when they had a progressive wing that included presidents like Abraham Lincoln and Theodore Roosevelt. Michigan has always been seen as a blue state, but the truth is much different: we're mostly Detroit, Ann Arbor, Bay City, and to a lesser extent, Flint, surrounded by the very worst of Mississippi. READ MORE
Posted by Obwon at 3:37 PM