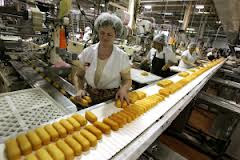 Hostess company continues to screw over its workers.
December 11, 2012

Twinkie-maker Hostess continues to screw over its workers. The company is in the process of complete liquidation and 18,000 unionized workers are set to lose their jobs. More troubling – they could lose their pensions.

According to a report by the Wall Street Journal , Hostess’ CEO, Gregory Rayburn, essentially admitted that his company stole employee pension money and put it toward CEO and senior executive pay (aka “operations”). While this isn't technically illegal, it's another sleazy theft by Hostess executives - who've paid themselves handsomely while running their company into the ground. Just last month, a judge agreed to let Hostess executives suck another $1.8 million out of the bankrupt company to pay bonuses to CEOs.

If there's no way to recover the money for the Hostess pension plans for workers, then the Pension Benefit Guaranty Corp. will have to foot the bill to make sure workers get at least some of the retirement money they paid in.

Hostess shows us clearly what Bain-style predatory capitalism is all about: big bucks for the very few rich executives, layoffs and poverty for the workers and their communities.  READ MORE