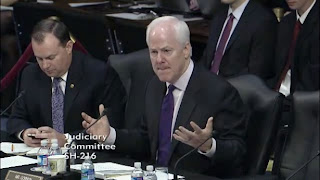 Why shouldn’t same sex couples have equal rights? According to Sen. John Cornyn (R-TX), it’s because equality is just too expensive.

“Repealing the Defense of Marriage Act (DOMA) would actually result in an expansion of federal benefits and spending at a time when we know that federal spending is way out of control and our entitlement programs are unsustainable,” he told the Senate Judiciary Committee Thursday.

“Repealing the Defense of Marriage Act would actually increase the cost of Social Security that is already insolvent,” he added. “No one has paid into the Social Security system expecting benefits to be paid to same sex partners.”

Committee Chairman Patrick Leahy (D-VT) later explained that same sex couples, like everyone else, deserved the benefits of the system they had been paying into.

“If you have a same sex couple, both of whom have paid into Social Security, both of whom have fulfilled all the things required, that somehow it would be wrong if they got the same benefits as an opposite sex couple would,” he said. “Fair is fair. They paid. They should be allowed. … I think if you’re paying the taxes, you’re fulfilling the obligations, you ought to get the same benefits as anybody else.”
READ MORE
Posted by Obwon at 10:31 AM