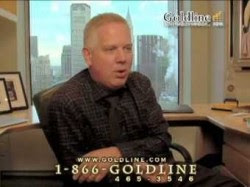 Goldline International, the precious metal retailer that has capitalized on conservatives’ anxiety about the economy by forging synergistic relationships with right wing TV and radio hosts, is facing a new series of legal challenges after authorities filed criminal charges against the company and its executives yesterday. Several major conservative talkers — including two former GOP presidential candidates — have endorsed and recommended Goldine, which critics have long contended is little more than a scam.

After more than a year of investigating, the city attorney in Santa Monica, California, where the company is based, has filed 19 criminal charges of fraud and theft against the company, in addition to charges against top executives and salesmen, ABC News reports:
READ MORE
Posted by Obwon at 10:41 AM