The People vs. Goldman Sachs 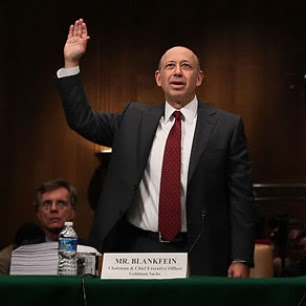 Matt Taibbi: A Senate committee has laid out the evidence. Now the Justice Department should bring criminal charges
by: Matt Taibbi

They weren't murderers or anything; they had merely stolen more money than most people can rationally conceive of, from their own customers, in a few blinks of an eye. But then they went one step further. They came to Washington, took an oath before Congress, and lied about it.

Thanks to an extraordinary investigative effort by a Senate subcommittee that unilaterally decided to take up the burden the criminal justice system has repeatedly refused to shoulder, we now know exactly what Goldman Sachs executives like Lloyd Blankfein and Daniel Sparks lied about. We know exactly how they and other top Goldman executives, including David Viniar and Thomas Montag, defrauded their clients. America has been waiting for a case to bring against Wall Street. Here it is, and the evidence has been gift-wrapped and left at the doorstep of federal prosecutors, evidence that doesn't leave much doubt: Goldman Sachs should stand trial.

This article appears in the May 26, 2011 issue of Rolling Stone. The issue is available now on newsstands and will appear in the online archive May 13.