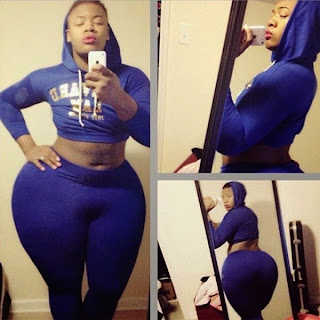 His name is Micah, he is 20 years old and lives in the United States. He is an up and coming R&B singer. He’s actually a pretty awesome singer if you ever get get to hear him sing, that is. Or, if you can manage to not be distracted by his physicality. Lets just say he has more hips than Kim Kardashian, K.Michelle, Nicki Minaj combined. I mean, he’ll put those women all to shame! More photos

My guess is that,  sometime around puberty,  he learned that his hips might keep growing and there was nothing any doctor could do about it.  So,  rather than drive himself insane,  wishing for nature to reverse itself,  he decided to face up and live with the problem,  instead of letting it beat him to death.  There is nothing he can do about  this,  so people on social media sites who are dissing him,  are only adding to his problems.  It's like cursing at a war veteran for losing a limb,   it makes no sense.   Is it some medical creation?  What surgeon would do such a thing?  Besides the surgery needed would be all but impossible and cost high 6 to 7 figures,  where would he get the money?  Is he gay or not?  I don't think that either matter or is anyone's business but his own.  He has a problem he has to live with,  anyway he can find to deal with it mentally,  says a lot of good things about him,  after all,  he could have made worse choices than to become a singer.


Here's the info on the nature of the disorder that causes this condition: Klinefelter syndrome Briefly: Klinefelter syndrome (/ˈklaɪnfɛltər/) or Klinefelter's syndrome, also known as 47,XXY or XXY,[1] is the set of symptoms resulting from a genetic disorder in which there is at least one extra X chromosome to a standard human male karyotype, for a total of 47 chromosomes rather than the 46 found in genetically typical humans.[2]

As the resulting individual possesses at least one Y chromosome, they are typically considered genetically male, although the phenotype can be male, female or intersex.[3] While females have an XX chromosomal makeup, and males an XY, individuals with Klinefelter syndrome have at least two X chromosomes and at least one Y chromosome.[4] This chromosome constitution (karyotype) exists in 1:500 to 1:1000 male live births[5][6][note 1] but many of these people may not show symptoms.

If the physical traits associated with the syndrome become apparent, they normally appear after the onset of puberty.[11] During puberty, the physical traits of the syndrome become more evident; because these boys do not produce as much testosterone as other boys, they have a less muscular body, less facial and body hair, and broader hips. As teens, XXY males may develop breast tissue[14] and also have weaker bones, and a lower energy level than other males.[5] READ MORE
Posted by Obwon at 7:51 AM No comments: Links to this post 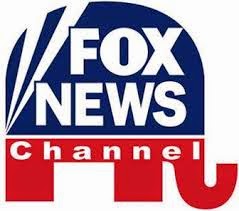 Earlier this week Fox News hosted Steven Emerson, an alleged terrorism expert, who claimed that the entire city of Birmingham, England was occupied by radical Muslims and was inaccessible to anyone else. His remarks were widely ridiculed, including by David Cameron, the British Prime Minister, who called Emerson an "idiot." Emerson later recanted and apologized for his "terrible error." But Fox wasn't done embarrassing itself with false tales of horror.

Over at Fox & Friends, Elisabeth Hasselbeck interviewed a former Air Force pilot who claimed to have personal knowledge of the deterioration of French society. Nolan Peterson said that there were "741 no-go zones throughout France." Peterson described his adventures in the wilds of Paris saying that...


"It was pretty scary. I've been to Afghanistan and Iraq and Kashmir, India, and at times it felt like that - those places in these no-go zones. [...and that...] You see young men wearing Osama Bin Laden t-shirts in a hookah shop."

Really? This veteran of Afghanistan and Iraq was scared of Paris? The segment was seen by Yann Barthès, the host of the French television program "Le Petit Journal." His response was to mercilessly flog Fox and Peterson while exposing the glaring errors in their analysis. For instance, Fox made reference to a poll that said that 16% of the French people had a favorable view of ISIS. However, that poll was debunked by the Washington Post, a point that Barthès noted.
READ MORE

Posted by Obwon at 7:33 AM No comments: Links to this post

A report released earlier this month by former heads of state and other global political figures made headlines across the world for calling the drug war a failure and for its endorsement of the decriminalization of drugs, including heroin and cocaine.

However, one of the report’s major criticisms, its critique of the militarization of the drug war, was largely neglected by the media.

“All out militarized enforcement responses have, counter-intuitively, undermined security in places like Afghanistan, Colombia, and Mexico,” said the Global Commission on Drug Policy in its report, Taking Control: Pathways to Drug Policies That Work.

The commission, which released its report on September 9, includes former presidents like Brazil’s Fernando Henrique Cardoso and Mexico’s Ernesto Zedillo, as well as former United Nations secretary general Kofi Annan and George P. Schultz, who served as US secretary of state in the Reagan administration.  READ MORE
Posted by Obwon at 11:11 AM No comments: Links to this post 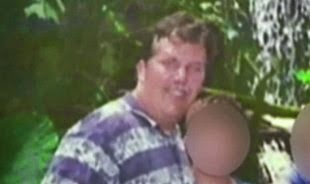 A plainclothes Volusia County sheriff’s deputy shot and killed a 52-year-old deaf man who was sitting in his vehicle Saturday afternoon, the Daytona Beach News-Journal reports.

The victim's son says he was sitting in another vehicle nearby when his father, Edward P. Miller, was shot six times. He and his father were at Dryer’s Towing Service around 2:30pm when the older Miller was shot by sheriff’s office investigator Joel Hernandez.

Sheriff Ben Johnson claims Miller was "brandishing a firearm" at the time of the shooting. Miller had a concealed weapons license. His son, also named Edward, claimed his father's gun was tucked in his waistband and covered by his shirt. READ MORE

Posted by Obwon at 11:05 AM No comments: Links to this post

What Does It Say About America That We Jail Teens for Having Sex or Being Late to School?

Why are we sending juveniles to jail for absurd reasons?
By Sarah Seltzer / AlterNet 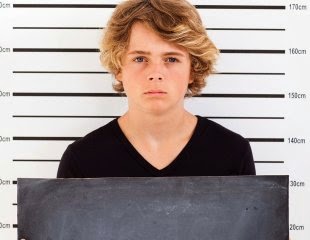 In the summer of 2012, the country was riveted by the story of young Diane Tran, a high school junior age 17, who was tossed in jail for a night because she was missing too much school.The reason her case attracted so much attention? Tran missed those days of school--or arrived late--due to exhaustion. She worked two jobs to help support her siblings. Her parents had split and moved out of town. She became, in essence, a poster-girl for both the recession and for the criminalization of youth. Even those local newscasters expected to be dispassionate were moved to say their "hearts went out" to this girl.

One of Tran's employers was a wedding planning business, which she assists and whose owners house her with her parents out of town. The other was a full-time job at a dry cleaning store. Her third job was going to school, where she is enrolled in several AP and honors classes, but missed 18 days. After a previous warning, a judge decided that a night in jail would teach her a lesson. He didn't see why people were kicking up such a fuss. "A little stay in the jail for one night is not a death sentence," the judge told the same local news channel. READ MORE
Posted by Obwon at 10:59 AM No comments: Links to this post

Yes Means Yes: Visions of Female Sexual Power and A World Without Rape is a feminist-themed book by Jaclyn Friedman and Jessica Valenti published in 2008. The book was one of the 99 Publishers Weekly's Best Books of 2009[1] and has inspired a sex education non-credit course at Colgate University.[2] 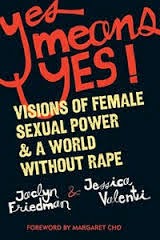 The book consists of a series of 27 essays by various authors which all share the central theme of preventing rape by addressing the cultural and societal milieu that the authors claim is complicit in enabling rape. The title is a reference to the popular "No Means No" campaign against date rape. Contributors to the anthology include Rachel Kramer Bussel, Leah Lakshmi Piepzna-Samarasinha, Stacey May Fowles, Coco Fusco, Lisa Jervis, Heather Corinna, Julia Serano, Hanne Blank, and Margaret Cho.
Colgate is committed to improving the sexual climate on campus, providing numerous programs to promote healthy sexuality. [3] Not only do they offer a course on Yes Means Yes: Visions of Female Sexual Power and A World Without Rape, they have a committee as well. This committee is called The Sexual Climate Advisory Committee. [4] This committee is composed of faculty, staff, and students.[5] It is charged with developing and evaluating initiatives at the individual, environmental, and system level that contribute to a climate of sexual respect. [6]Scott Brown, who is the dean of students, leads monthly meetings. [7] 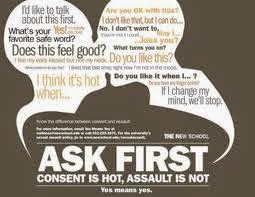 From the slogan, "No Means No", colleges are abandoning the old slogan and accepting "Yes Means Yes" to promote more positivity. “The swiftly evolving conversation about defining sexual assault signaled to us that we needed to reframe our name as something more positive... and it’s even possible that ‘No means no’ will be an outdated or irrelevant concept in 10 years. Students may not have even heard of the phrase by then", said by Allison Korman, the group’s executive director.[8] Now, there are more than eight hundred colleges and universities that have adopted an affirmative consent definition in their sexual assault policies.[9]
READ MORE
Posted by Obwon at 10:45 AM No comments: Links to this post