US cited for police violence, racism in scathing UN review on human rights 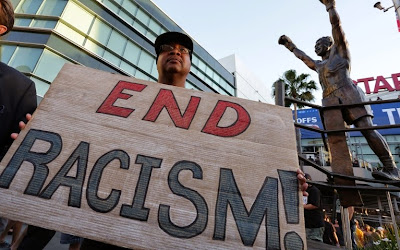 by Natasja Sheriff
The United States was slammed over its rights record Monday at the United Nations’ Human Rights Council, with member nations criticizing the country for police violence and racial discrimination, the Guantánamo Bay Detention Facility and the continued use of the death penalty.

The issue of racism and police brutality dominated the discussion on Monday during the country’s second universal periodic review (UPR). Country after country recommended that the U.S. strengthen legislation and expand training to eliminate racism and excessive use of force by law enforcement.
"I'm not surprised that the world's eyes are focused on police issues in the U.S.," said Alba Morales, who investigates the U.S. criminal justice system at Human Rights Watch.

"There is an international spotlight that's been shone [on the issues], in large part due to the events in Ferguson and the disproportionate police response to even peaceful protesters," she said.

Anticipating the comments to come, James Cadogan, a senior counselor to the U.S. assistant attorney general, told delegates gathered in Geneva, "The tragic deaths of Freddie Gray in Baltimore, Michael Brown in Missouri, Eric Garner in New York, Tamir Rice in Ohio and Walter Scott in South Carolina have renewed a long-standing and critical national debate about the even-handed administration of justice. These events challenge us to do better and to work harder for progress — through both dialogue and action."  READ MORE
Posted by Obwon at 7:40 PM

Email ThisBlogThis!Share to TwitterShare to FacebookShare to Pinterest
Labels: UN On US Human Rights