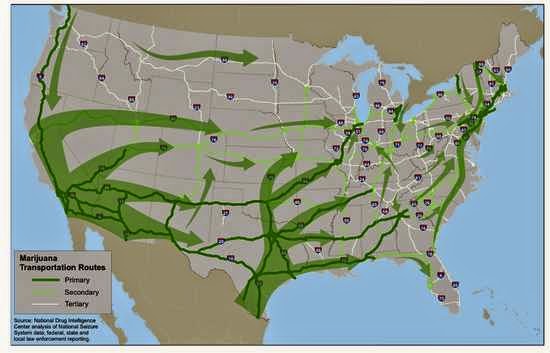 There are a number of reasons to support legalization. Now you can add one more.


Farmers in the storied “Golden Triangle” region of Mexico’s Sinaloa state, which has produced the country’s most notorious gangsters and biggest marijuana harvests, say they are no longer planting the crop. Its wholesale price has collapsed in the past five years, from $100 per kilogram to less than $25.


“It’s not worth it anymore,” said Rodrigo Silla, 50, a lifelong cannabis farmer who said he couldn’t remember the last time his family and others in their tiny hamlet gave up growing mota. “I wish the Americans would stop with this legalization.”

Several of Mexico's states can be considered failed states because the drug cartels are out of control. The country of Mexico is in the warning status. One hitman for the cartels said he killed 800 people before he stopped keeping track.

Denying those drug cartels cash would certainly be a step in the right direction.  READ MORE
Posted by Obwon at 12:57 PM