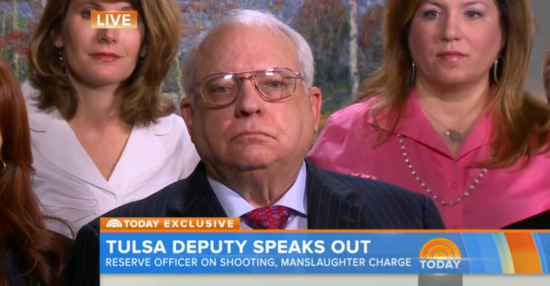 Bob Bates, the 73-year-old Tulsa reserve deputy who was recently arrested for shooting and killing 44-year-old Eric Harris, gave his first public interview on Friday morning with Matt Lauer of the Today Show. The man is clearly getting terrible legal advice. Allowed to ramble on, Bates not only physically demonstrated for Matt Lauer  just how ridiculous it was to confuse his firearm with a Taser (see the video below the fold), but he continued to advance a central lie about his training.

In speaking with Lauer, Bates said that the only person who is claiming his training records were falsified is a police officer who is currently in prison for murder. This isn't true. Cole Crittenden, a former professional wrestler turned Tulsa cop, is in jail for murder right now. It was actually Cole Crittenden who signed off on the training records for Bates—which should raise suspicion all by itself.

However, I contacted Dylan Goforth, a reporter with the Tulsa World newspaper that broke the story on officers being disciplines and reassigned when they refused to falsify records for Bates. Goforth said that Crittenden is not the newspaper's source, but current employees of the Tulsa Sheriff's Office who are extremely afraid for their safety are the sources for the information.
The Justice Department needs to intervene in this case immediately.
See the full interview below the fold.  READ MORE
Posted by Obwon at 12:40 PM