UPDATE: ‘Stand Your Ground’ Got Marissa Alexander 20 Years with No Community Outrage 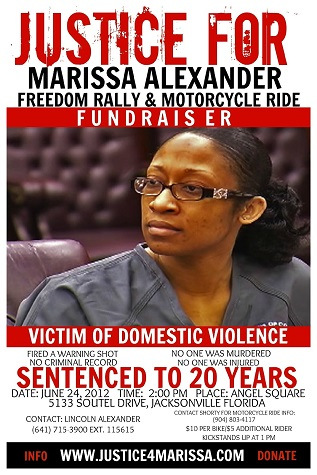 *We are sitting on the precipice of the George Zimmerman trial set to begin on Monday, June 10, but we hope that people remember Marissa Alexander when the trial begins.

Marissa Alexander is the Florida mother and abused wife that fired a warning shot in her home to keep her husband, Rico Gray, from killing her –as he promised– and was sentenced to a mandatory 20 years in prison.

The Stand Your Ground law that she thought would protect her did not…and she didn’t kill anyone.  Her children were present and she was trying to protect herself.

She didn’t pursue him.  She did not kill him.  She was simply protecting herself and she is still waiting to see the community outraged by the extreme punishment.

George Zimmerman, on the other hand, stalked Trayvon Martin and willingly disregarded the authorities instructions for him to leave the 18-year-old alone and let them handle what Zimmerman, in his twisted thoughts, conveyed as a threat.

END_OF_DOCUMENT_TOKEN_TO_BE_REPLACED

Posted by Obwon at 5:54 AM No comments: Links to this post 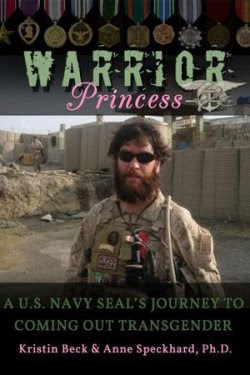 The new memoir by a U.S. Navy SEAL has nothing to do with Osama bin Laden. Instead, Warrior Princess tells the story of Chris Beck, the burly, bearded person on the cover and a "consummate guy's guy," who has since come out as transgender and changed her name to Kristin. After retiring in 2011, Beck decided "to make his body match his identity." (The repeal of "Don't Ask, Don't Tell" does not apply to transgender service members.) To Beck's delight, the manly killing machines she used to work with were accepting.

"I am now taking off all my disguises and letting the world know my true identity as a woman," Beck wrote on LinkedIn, alongside a new profile picture of Kristin featuring the American flag. (Also, Navy SEALs use LinkedIn like Facebook, apparently.) "Brother, I am with you ... being a SEAL is hard, this looks harder. Peace," one SEAL commented. Another added, "I just wanted to drop you a note and tell you that Kris has all the support and respect from me that Chris had ... and quite possibly more." America!  READ MORE

Posted by Obwon at 5:43 AM No comments: Links to this post