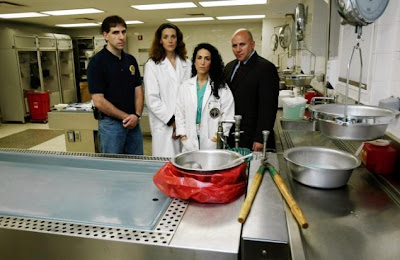 Theresa Caragine stepped down in April after it was revealed she had overruled staff under her supervision and failed to turn the conflicts over to a third party. Now the door has been opened for some criminal cases to be contested for use of potentially faulty test results.

A top deputy at the medical examiner’s office who has been lauded for her work in DNA testing resigned amid revelations that she sidestepped lab protocol in at least two criminal cases, the Daily News has learned.

The abrupt April 19 departure of Theresa Caragine is the latest snafu to befall the office and has already affected ongoing cases in the Bronx and Brooklyn, according to court papers.

Hundreds of rape cases the office examined were already under review due to potentially botched testing by lab tech Serrita Mitchell, 55, who resigned but later denied wrongdoing.

That scandal also led to the suspension of Mecki Prinz, the office’s forensic biology director. Prinz, 55, resigned May 3.

The latest debacle has opened the door for defense lawyers to question DNA evidence in several cases.


Caragine’s actions came to light because Legal Aid Society lawyers have been digging for details about her resignation and complex DNA testing she oversaw, said Alan Gardner, head of Legal Aid’s DNA unit.
READ MORE
Posted by Obwon at 6:52 AM No comments: Links to this post

SOMEWHERE OVER THE RAINBOW

Posted by Obwon at 2:03 PM No comments: Links to this post