BRUSSELS — They are a large and diverse group that includes a Spanish heiress; the daughter of the former Philippine dictator Ferdinand Marcos; and Denise Rich, the former wife of the disgraced trader Marc Rich, who was pardoned by President Bill Clinton. But, according to a trove of secret financial information released Thursday, all have money and share a desire to hide it.

And, it seems safe to say, they — and thousands of others in Europe and far beyond, in places like Mongolia — are suddenly very anxious after the leak of 2.5 million files detailing the offshore bank accounts and shell companies of wealthy individuals and tax-averse companies.
“There will be people all over the world today who are now scared witless,” said Richard Murphy, research director for Tax Justice Network, a British-based organization that has long campaigned to end the secrecy that surrounds assets held in offshore havens. The leaked files include the names of 4,000 Americans, celebrities as well as more mundane doctors and dentists.

It is not the first time leaks have dented a thick carapace of confidentiality that usually protects the identities of those who stash money in the British Virgin Islands, the Cayman Islands, Liechtenstein and other havens. Nor, in most cases, is keeping money in such places illegal.
But the enormous size of the data dump obtained by the International Consortium of Investigative Journalists, a Washington-based group that, along with affiliated news media organizations, announced its coup on Thursday, has punched a big hole in the secrecy that surrounds what the Tax Justice Network estimates are assets worth at least $21 trillion held in offshore havens. “This could be a game-changer,” said Mr. Murphy, the author of a book about offshore tax shelters. “Secrecy is the key product these places sell. Whether you are a criminal laundering money or just someone trying to evade or avoid taxes, secrecy is the one thing you want.” Once this is gone, he added, “it creates an enormous fear factor” and has a “massive deterrent effect.”  READ MORE

Posted by Obwon at 6:41 AM No comments: Links to this post

Everything is Bigger in Texas, Including the Aryan Brotherhood 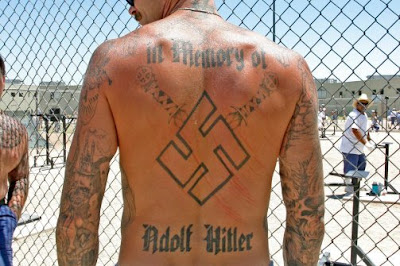 Texas is experiencing incredible economic success. Texas leads the United States in oil and gas production and job growth.    In February alone Texas employers added over 80,000 jobs. The unemployment rate in Texas hovers aroung 6.3% as compared to the national average of 7.7%. Texas also is proud to have the fastest growing cities in the country. The top three growth cities in the country are Austin #1, Houston #2, and Dallas #3. While Rick Perry would like to take credit for the economic success of the state, it is more likely attributable to the lack of state income tax, which is made possible by the presence of such large oil & gas reserves.

While the country identifies Texas as a leader in economic growth, it is also a leader in the Aryan Brotherhood.

The Life Expectancy for a District Attorney in Texas must be the shortest in the country. Last Saturday District attorney Mike McLelland and his wife were found dead in their home. It was just two months ago that Mr. McLelland had vowed to put away the “scum” who had killed one of his deputies. The county sheriffs have brought in the FBI to help with the investigation. Thank heavens we didn’t secede from the United States, as our Governor had suggested!

Mr. Hasse, the district attorney who was shot on his way to work outside the county court house two months ago, had carried a gun for protection, and even changed the exit he took every day from the Court House, for security reasons.
While no charges have been filed, there is great speculation that the Aryan brotherhood of Texas is involved. The Aryan Brotherhood of Texas is at the center of a large federal case that involves racketeering, murder, kidnapping and other various crimes. The Aryan Brotherhood of Texas is described as a “whites only” prison based gang in operation since the 80’s. They are arguably the most violent white supremacist prison gang in the United States. The group has been credited with more than 100 murders, and at least 10 kidnappings. Their code is ‘blood-in, blood-out‘ meaning that you can only get into ABT by carrying out some kind of attack,” and … you can only leave in a body bag. READ MORE

Posted by Obwon at 8:20 AM No comments: Links to this post