Msg. Kevin Wallin, who led St. Augustine’s Parish in Bridgeport, Conn., also reportedly liked to dress as a woman. ‘We had no indication he had a drug problem and never had complaints regarding him and drugs,’ said Diocese spokesman Brian Wallace.

A former Catholic priest busted on charges of selling crystal meth would appear at his Connecticut church dressed as a woman and was fond of sex in the rectory, according to a published report.
Msg. Kevin Wallin, 61, resigned as spiritual leader of St. Augustine’s Parish in Bridgeport in 2011, but he continued to receive a stipend from the Roman Catholic Diocese until his Jan. 3 arrest on drug charges.
Wallin, nicknamed “monsignor meth,” might have been laundering his drug profits at a Westbury porn store he owned called the Land of Oz, investigators told the Connecticut Post.
CONN. PRIEST BUSTED IN METH RING
Before he stepped down from the altar at St. Augustine’s, the priest’s behavior had become erratic, and he would disappear for days at a time, sources told the Post.  READ MORE

Posted by Obwon at 8:32 AM No comments: Links to this post 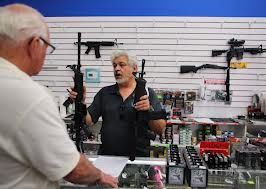 Gun control advocates say that fewer guns mean less gun crime. But a Dec. 16 posting on Facebook by a group calling itself the Conservatives Club argues exactly the opposite, and uses the example set by Switzerland to prove its point.

The portion of the post, titled "A Little Gun History," that is in all capital letters caught our attention. It says, "Switzerland issues every household a gun! Switzerland's government trains every adult they issue a rifle.

One source of information about guns is GunPolicy.Org, an evidence-based database on firearm safety hosted by the Sydney School of Public Health in Australia and partly co-funded, coincidentally, by the Swiss Federal Department of Foreign Affairs. We ran some comparisons through their database. We're not going to get into the definition of what makes a "civilized" country; instead, we looked at GunPolicy.org’s data on gun homicide rates for 24 countries, mostly in western Europe but also Japan, Australia, New Zealand, Canada and the United States. Switzerland's gun homicide rate was anything but "the lowest." It was fourth highest. READ MORE
Posted by Obwon at 4:54 PM No comments: Links to this post

There Goes the Boom - ATF

An amendment limiting the law enforcement powers of the ATF couldn't be worse if the NRA wrote it themselves -- which it did.
Posted by Obwon at 4:09 PM No comments: Links to this post

Posted on April 5, 2012 by Jueseppi B.
The American Legislative Exchange Council (ALEC) is a politically conservative  501(c)(3) nonprofit policy organization, consisting of both state legislators and members of the private sector, mostly representing corporations. ALEC’s mission statement describes the organization’s purpose as the advancement of free-market principles, limited government, federalism, and individual liberty. Among other activities, the group provides a venue for private individuals and corporations to assist politicians in developing what it considers model laws serving the economic and political aims of its members. ALEC also serves as a networking tool among state legislators, allowing them to research the handling and “best practices” of policy in other states.

ALEC currently has more than 2,000 legislative members representing all 50 states, as well as more than 85 members of congress and 14 sitting or former governors who are considered “alumni”. ALEC also claims approximately 300 corporate, foundation, and other private-sector members. A list of ALEC leaders in the states includes 73 Republican lawmakers and 7 Democrats.

The chairmanship of ALEC is a rotating position, with a new legislator appointed to the position each year. The current chair of ALEC is Dave Frizzell, a member of the Indiana House of Representative. Day-to-day operations are run from ALEC’s Washington, D.C. office by an executive director and a staff of approximately 30.

Slave wages in private prisons is bad but this is worst. In effect, it nullifies the 13th Amendment and creates a system where an employer can make a slave of an employee. (PDF)

Posted by Obwon at 6:23 AM No comments: Links to this post

The Messy Link Between Slave Owners and Modern Management

The Messy Link Between Slave Owners and Modern Management While studying the history of business practices, HBS researcher Caitlin Rosenthal made a startling discovery: Many of the techniques pioneered by slave owners in the 1800s are widely used in business management today. Rosenthal discusses her findings in this story by Katie Johnston, which first appeared on the HBS Working Knowledge website. Caitlin C. Rosenthal didn’t intend to write a book about slavery. She set out to tackle something much more mundane: the history of business practices. But when she started researching account books from the mid-1800s, a period of major economic development during the rise of industrialization in the United States, Rosenthal stumbled across an unexpected source of innovation. Rosenthal, a Harvard-Newcomen Fellow in business history at Harvard Business School, found that southern plantation owners kept complex and meticulous records, measuring the productivity of their slaves and carefully monitoring their profits—often using even more sophisticated methods than manufacturers in the North. Several of the slave owners’ practices, such as incentivizing workers (in this case, to get them to pick more cotton) and depreciating their worth through the years, are widely used in business management today. As fascinating as her findings were, Rosenthal had some misgivings about their implications. She didn’t want to be perceived as saying something positive about slavery. On the contrary, she sees her research as a critique of capitalism—one that could broaden the understanding of today’s business practices. The work is part of her current book project, “From Slavery to Scientific Management: Capitalism and Control in America, 1754-1911,” and the forthcoming edited collection Slavery’s Capitalism. READ MORE
Posted by Obwon at 3:01 PM No comments: Links to this post

Executives continue to point the finger at 'employee greed' while trying to collect almost $2 million in bonuses for themselves.

By now everyone’s heard much about  the demise of Twinkie-maker and sugar-enabler, Hostess Brands. This week, a bankruptcy court granted permission to the company to initiate the selling of its assets, a move that punctuates 10 years of economic decline for the company. And though executives like CEO Greg Rayburn have been quick to blame the bakers' union in particular for its financial difficulties, recently revealed numbers about executives' money management choices tell a different story.

According to WSJ, in 2011 when the company was mired in almost a billion dollar debt, then-CEO Brian Driscoll tripled his own salary, while other top executives received 35-80% raises as well. Creditors griped that it was the company's way of "side-stepping" bankruptcy laws. Though Driscoll was replaced by Rayburn earlier this year, workers complain that this type of money mismanagement was par for the course at the snack manufacturer.

As if trying to prove that fact, the Washington Post reports that this week the company not only asked the bankruptcy court for permission to immediately liquidate 15,000 factory workers’ jobs, but also for permission to grant its current executive board $1.75 million in bonuses.

In contrast, according to Reuters,  full-time bakers, including those who've been at the company for decades, were as of late, making $35,000 per year (with overtime), which was down from the $45,000 they were making five years prior.     READ MORE
Posted by Obwon at 8:28 AM No comments: Links to this post 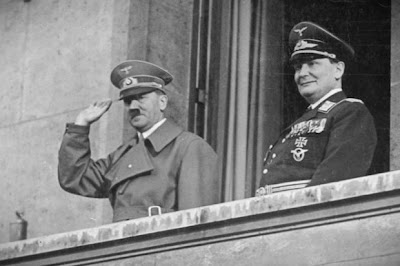 This week, people were shocked when the Drudge Report posted a giant picture of Hitler over a headline speculating that the White House will proceed with executive orders to limit access to firearms. The proposed orders are exceedingly tame, but Drudge’s reaction is actually a common conservative response to any invocation of gun control.

The NRA, Fox News, Fox News (again), Alex Jones, email chains, Joe “the Plumber” Wurzelbacher, Gun Owners of America, etc., all agree that gun control was critical to Hitler’s rise to power. Jews for the Preservation of Firearms Ownership (“America’s most aggressive defender of firearms ownership”) is built almost exclusively around this notion, popularizing posters of Hitler giving the Nazi salute next to the text: “All in favor of ‘gun control’ raise your right hand.”

In his 1994 book, NRA head Wayne LaPierre dwelled on the Hitler meme at length, writing: “In Germany, Jewish extermination began with the Nazi Weapon Law of 1938, signed by Adolf Hitler.”
And it makes a certain amount of intuitive sense: If you’re going to impose a brutal authoritarian regime on your populace, better to disarm them first so they can’t fight back.

Unfortunately for LaPierre et al., the notion that Hitler confiscated everyone’s guns is mostly bogus. And the ancillary claim that Jews could have stopped the Holocaust with more guns doesn’t make any sense at all if you think about it for more than a minute.    READ MORE

Posted by Obwon at 9:48 AM No comments: Links to this post