The 10 Most Corrupt Tax Loopholes 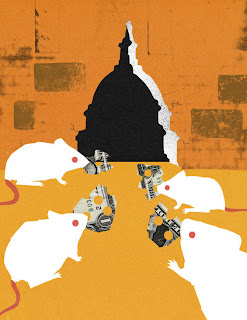 If Mitt Romney won't tell you which need to be closed, we will

By Chris Parker Wednesday, Oct 10 2012
A year ago, Citizens for Tax Justice, a Washington, D.C., nonprofit, studied the tax returns of 280 corporations. What it found was a Beltway version of a Mafia protection scheme.
From 2008 to 2010, at least 30 Fortune 500 companies—including PepsiCo, Verizon, Wells Fargo, and DuPont—paid more for lobbyists than they did in taxes. They collectively spent $476 million sucking up to Congress, buying protection for tax breaks, loopholes, and special subsidies.

It didn't matter that these same 30 firms brought home a staggering $164 billion in profit during that three-year period. They not only managed to avoid paying taxes, but they also actually received $10.6 billion in rebates.

Welcome to the U.S. tax code, where companies like General Electric and Boeing contribute less to the federal treasury than a retired machinist living in Florida.
Defenders of the system argue that most deductions don't go to large corporations. That's true. By pure dollars, the lion's share go for mortgage interest, employer-paid health insurance, retirement plans, and Medicare benefits.

The difference is these tend to benefit everyone. They're designed for the greater good, reinforcing the pillars of self-determination: home ownership, savings, and health care.
But there's another part of the tax code where 99 percent of America is barred from entry. It's where Congress sells loopholes and subsidies to those with the wallets to pay.   READ MORE
Posted by Obwon at 1:02 PM No comments:

By Katie Drummond, The Daily

s the suicide rate among soldiers climbs to the highest levels in history, the Army is hoping Americans might one day treat their mental health woes with a single sniff.

The Army has just handed a $3 million grant to researchers at the University of Indiana's School of Medicine for the creation of an anti-suicide nasal spray. The project, to be led by Dr. Michael Kubek, an associate professor of neurobiology, is arguably one of the more unusual military efforts to thwart a record number of suicides among active-duty personnel and veterans.

"Suicide is the toughest enemy I have faced in my 37 years in the Army," Gen. Lloyd J. Austin III, the Army's vice chief of staff, said this week in announcing new suicide numbers. Austin is spearheading his service's efforts to find ways to halt the surge in suicides.

"That said, I do believe suicide is preventable," Austin added. "To combat it effectively will require sophisticated solutions aimed at helping individuals to build resiliency and strengthen their life coping skills."

According to Kubek and his colleagues, a snort of their suicide-stopping neurochemical - a naturally occurring compound called thyrotropin-releasing hormone, or TRH - could be the solution.
Suicide among American troops has increased steadily since the start of the wars in Iraq and Afghanistan. In July, the number of suicides among active-duty soldiers reached 26 - more than double the number in June and the highest for any month since the Army began keeping such statistics.    READ MORE
Posted by Obwon at 7:43 AM No comments:

The United States' Clandestine Armies Plunge Us Deeper Into Violence

A Swedish documentary filmmaker released a film last year called "Last Chapter—Goodbye Nicaragua." In it he admitted that he unknowingly facilitated a bombing, almost certainly orchestrated by the Sandinista government of Nicaragua, which took the lives of three reporters I worked with in Central America. One of them, Linda Frazier, was the mother of a 10-year-old son. Her legs were torn apart by the blast, at La Penca, Nicaragua, along the border with Costa Rica, in May of 1984. She bled to death as she was being taken to the nearest hospital, in Ciudad Quesada, Costa Rica.

The admission by Peter Torbiornsson that he unwittingly took the bomber with him to the press conference was a window into the sordid world of espionage, terrorism and assassination that was an intimate part of every conflict I covered. It exposed the cynicism of undercover operatives on all sides, men and women who lie and deceive for a living, who betray relationships, including between each other, who steal and who carry out murder. One knows them immediately. Their ideological allegiances do not matter. They have the faraway eyes of the disconnected, along with nebulous histories and suspicious and vague associations. They tell incongruous personal stories and practice small deceits that are part of a pathological inability to tell the truth. They can be personable, even charming, but they are also invariably vain, dishonest and sinister. They cannot be trusted. It does not matter what side they are on. They were all the same. Gangsters.

All states and armed groups recruit and use members of this underclass. These personalities gravitate to intelligence agencies, terrorist cells, homeland security, police departments, the special forces and revolutionary groups where they can live a life freed from moral and legal constraints. Right and wrong are banished from their vocabulary. They disdain the constraints of democracy. They live in this nebulous underworld to satisfy their lusts for power and violence. They have no interest in diplomacy and less in peace. Peace would put them out of business; for them it is simply the temporary absence of war, which they are sure is inevitable. Their job is to use violence to purge the world of evil. And in the United States they have taken as hostages our diplomatic service and our foreign policy establishment. The CIA has become a huge private army, as Chalmers Johnson pointed out in his book "Nemesis: The Last Days of the American Republic," that is "unaccountable to the Congress, the press or the public because everything it does is secret." C. Wright Mills called the condition "military metaphysics"—"the cast of mind that defines international reality as basically military."    READ MORE

Should police and the government be able to track you by your cell phone GPS without obtaining a search warrant? A federal appeals court appears to believe so, and recently ruled that tracking suspected criminals by their cell phones is similar to tailing their car or tracking their scent with police dogs.

Civil liberties groups say the broad ruling, handed down by the Sixth Circuit Court of Appeals in Ohio, could have sweeping impacts on the Fourth Amendment privacy rights of the innocent as well as those suspected of crimes.

Agents gathered Skinner's cell phone information and tracked him without a search warrant and instead obtained a court order that did not meet the probable cause standard of most search warrants. The American Civil Liberties Union (ACLU) and the Electronic Frontier Foundation (EFF) filed briefs in similar cases arguing that warrantless cell phone tracking and data access violates the Fourth Amendment, which protects citizens against unreasonable search and seizure without probable cause.
READ MORE
Posted by Obwon at 7:09 AM No comments:

everett, WA
This is a conflict of interest to say the least, and could invite fraud~!!!!

This is a conflict of interest to say the least, and could invite fraud~!!!!

Romney Said He Paid 13% in Taxes, But He Strategically Avoided Saying Income Taxes 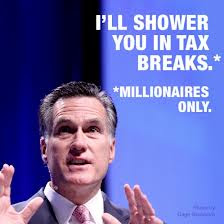 
Last week, we posted a widely read commentary, "Did Romney Possibly Commit Fraud on His Income Taxes, But Received Amnesty?"

But there was another significant flare up about Romney's undisclosed income taxes last week, yet again.  The New York Times headlined it this way: "Romney Says He Paid at Least 13% in Income Taxes." The New York Times article of August 17 also this quotation and reporter interpretation, "'Every year, I’ve paid at least 13 percent,' he [Romney] said, referring to his effective federal income tax rate, which is a higher effective rate than most people pay."

There is a problem with the New York Times article and it is a big one.  Mitt Romney never referred directly to what he has or has not paid in income tax; he only referred to what he and his wife have paid in taxes in general over the last several years. (There is a second problem: The New York Times reporter implies that 13% is a high income tax rate.)

The Boston Globe also made the same mistake as the New York Times, inferring what Romney wanted them to think, rather than what he actually said.   READ MORE
Posted by Obwon at 10:59 AM No comments:

ormer Vice President Dick Cheney would agree that he is about as right-wing as an American politician can be, openly hostile to the federal government's intervention in society. But one surprise from his memoir, In My Time, is that Cheney recognizes that his personal success was made possible by Franklin Roosevelt's New Deal and the fact that Cheney's father managed to land a steady job with the federal government.

"I've often reflected on how different was the utterly stable environment he provided for his family and wondered if because of that I have been able to take risks, to change directions, and to leave one career path for another with hardly a second thought," Cheney writes.

In that sense, Cheney's self-assuredness may be as much a product of the New Deal as the many bridges, dams and other public works that Roosevelt commissioned in the 1930s to get Americans back to work. By contrast, the insecurity that afflicted Cheney's father was a byproduct of the vicissitudes from laissez-faire capitalism.   READ MORE
Posted by Obwon at 10:51 AM No comments:

Anonymous Billionaires Are Stealing Your Election

t would be bad enough, as I reported last week, that 47 billionaires were responsible for the lion's share of individual Super PAC contributions. It turns out that the Super PACs aren't even the biggest players.

The biggest players are the dark money PACs, which do not have to reveal the sources of their funding.

If we just look at the television ads bankrolled by the top six sources of funding, we make a startling discovery, which Kim Barker reported on in these pages last week.

The 'dark money' PACs are outspending everyone else. Crossroads GPS, founded by Karl Rove and backed by anonymous big-money donors, has bought negative attack ads against President Obama to the tune of $52 million! The Koch brothers' Americans for Prosperity spent $20.6 million. The political parties and the Super PACs, which have to identify the source of their funds, are making a much smaller contribution.    READ MORE
Posted by Obwon at 10:42 AM No comments: