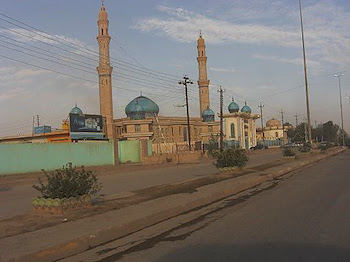 
“It is not written in our hearts, it is carved in our hearts.” I awoke this morning still shaken with these words in my head.

Yesterday I was in Ramadi and Fallujah. Instead of bringing a message of caring, of empathy for their suffering and a desire for peace, my presence as someone from the U.S, seemed to open wounds that are unfathomably deep.

I sat in on a lecture, given in English, to maybe fifty or more young men and women at a college in Ramadi. They were all about 22 and 23 years of age, in their last year of a 5-year program. That means they were about 13 or 14 years old during the U.S. led invasion and beginning of the occupation. I was invited to speak by the president as an “honored guest” after the lecture. To my embarrassment the professor graciously hurried through his lecture on my account. I had everyone’s attention. It was awkward for me, and after introducing myself, I said I would be grateful to hear from them. There was only silence. I am sure my words sounded empty, trite and artificial.

Then a young man in the front row only a couple of feet from me said in a quiet voice “We have nothing to say. The last years have been only sad ones.” Again there was silence.

Sami, my host from Najaf and part of the Muslim Peacemaker Team, stood and shared. He told the story of how, after the U.S. bombing assaults on Fallujah, he and others came from the Shia cities of Najaf and Karbala, to carry out a symbolic act of cleaning up rubble and trash in the streets of Fallujah. This gesture, he said, melted hearts and healed some of the brokenness between Sunni and Shia. He spoke of the delegation of peacemakers from the United States who were just in Najaf for twelve days, of the work to build bridges and seek reconciliation.