Boehner Blows It with a Plan Destined to Fail 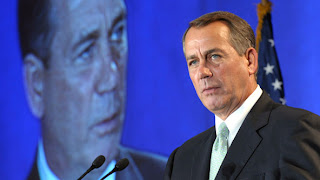 The main thing that has held Republicans together philosophically is the belief in holding down taxes. Not one of them in Congress has voted for a significant increase in more than two decades. Now that very issue is tearing the GOP apart and making it an all-but-ungovernable majority for Speaker John A. Boehner (R-Ohio) to lead in the House.

Disarray is a word much overused in politics. But it barely begins to describe the current state of chaos and incoherence as Republicans come to terms with electoral defeat and try to regroup against a year-end deadline to avert a fiscal crisis.

The presidential election was fought in large measure over the question of whether some Americans should pay more in taxes. Republicans lost that argument with the voters, who polls show are strongly in favor of raising rates for the wealthy.

But a sizable contingent within the GOP doesn’t see it that way and is unwilling to declare defeat on a tenet that so defines them. Nor are they prepared to settle for getting the best deal they can, as a means of avoiding the tax hikes on virtually everyone else that would take effect if no deal is reached.  READ MORE
Posted by Obwon at 7:43 AM

Email ThisBlogThis!Share to TwitterShare to FacebookShare to Pinterest
Labels: Boehner, Plan B