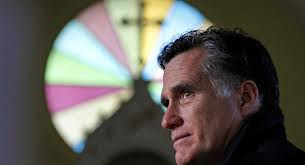 Mormon women remember Romney's advice when he was a church leader, and there wasn't much 'moderate' about it.
October 17, 2012

The summer of 1983 was blistering hot in New England. A record heat wave saw temperatures soar toward the 100-degree mark from June well into September. July had been the hottest month ever recorded at Boston's Logan Airport.

The region's beloved Boston Red Sox, full of hope and promise early in spring and claiming first place in the American League East as late as June 1, apparently melted in the heat, losing game after game and tumbling to last place by mid-July, where they were to remain the rest of the season.

It was also during the sweltering summer of 1983 that the family of Republican presidential candidate Mitt Romney made its celebrated escape from the oppressive New England heat for the cooler climes of Beach O'Pines, Ontario, where the Romney family owns a beachfront cottage in a gated community on the shores of Lake Huron. Prior to departure, Mitt Romney placed the family dog—an Irish setter named Seamus—into a dog carrier and lashed it to the roof of the family's Chevy station wagon for the 12-hour drive into Canada.