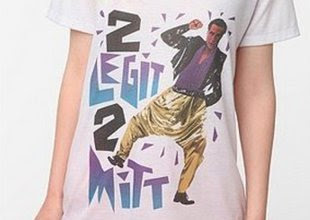 
Urban Outfitters is the kind of place where you see a lot of young, idealistic progressive types both browsing the racks and standing behind the cash register. Young Republicans, not so much; for khaki pants, bow ties and pin-striped blazers, you’re better off heading to Brooks Brothers.

In 2008 the company sold all kinds of Obama T-shirts, including one that featured the now-famous Shepard Fairey illustration of the Democratic candidate, and no one batted an eye. College kids and hipsters wanted Obama T-shirts! Many of them would probably buy one today.

Which raises the question: Why on earth is Urban Outfitters now selling T-shirts featuring Mitt Romney?
There are a few reasonable explanations for why the Urban Outfitters Romney tees exist, actually. For one thing, Urban Outfitters (which also owns Anthropologie and Free People) is owned by a far-right conservative, Richard Hayne. All that youthful, vaguely hippie-feeling merchandise in his stores?

That’s just a way to make some dough – dough that Hayne, in turn, gives to right-wing politicians like Rick Santorum. For Hayne, the young people and lefties who shop in his stores are just chumps to whom he can sell $69 peace-sign tank tops while supporting conservative politics.
READ MORE
Posted by Obwon at 8:37 AM