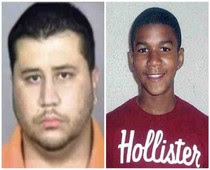 By Rene Stutzman and Jeff Weiner, Orlando Sentinel
5:51 p.m. EST, May 22, 2012
Evidence released last week in the second-degree-murder case against George Zimmerman shows four key witnesses made major changes in what they say they saw and heard the night he fatally shot 17-year-old Trayvon Martin in Sanford.
Three changed their stories in ways that may damage Zimmerman. A fourth abandoned her initial story, that she saw one person chasing another. Now, she says, she saw a single figure running.

Here are the key ways in which their stories changed.   READ MORE
Posted by Obwon at 8:36 AM