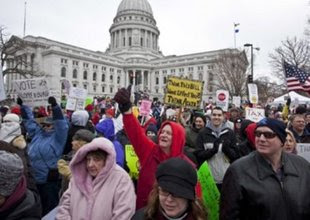 
“The folks that were angry about this started a recall....Not hundreds, not thousands, but tens of thousands of ordinary people did an extraordinary thing. They stood up and took their government back.” -- Gov. Scott Walker, discussing the 2002 recalls that led to his election as Milwaukee County Executive.

Those words, uttered by Wisconsin Republican Gov. Walker in an ad during his 2010 gubernatorial campaign, are strikingly relevant today.

In a 60-day period during a cold Wisconsin winter, state residents collected nearly one million signatures for Walker’s recall, with an election date now scheduled for June 5. That election, which will likely be very close and will almost certainly break new records for spending in the state, will end this stage of a year-and-a-half-long battle over Walker’s divisive reforms, including his controversial attack on public employee unions.    READ MORE
Posted by Obwon at 6:02 AM