Here's an even more detailed timeline written by lawyers following the case:

Posted on April 5, 2012 by Susan Simpson
I want to write a more in depth post  on the killing of Trayvon Martin, but when trying to figure out how strong Zimmerman’s claim of self-defense might be, I got frustrated by the lack of any in-depth, detailed time lines of the events leading up to and immediately following Trayvon’s death. In order to get a better idea of what exactly happened, I’ve laid out here a chronology of the shooting based on (1) call logs of the calls to 911 and the police made that night; (2) recordings of the calls themselves; and (3) the police report and surveillance video that have been made available to the public.   READ MORE

Here'a a good diagram of the area,  I've left it purposely very large for copying. 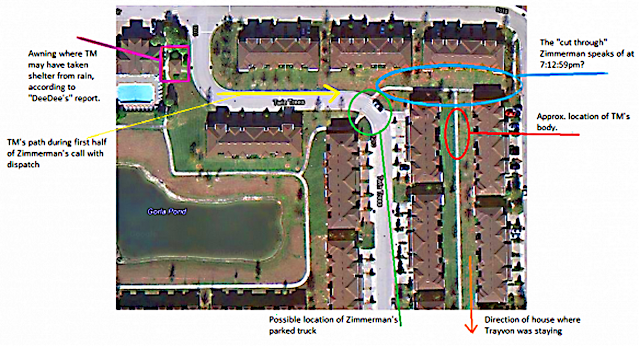 Here's a video timeline analysis attempt,  note it leaves out the fact that Trayvon came in the front gate and took shelter under an awning there for 4 to 5 minutes while talking to his girlfriend.  At which time Zimmerman does not see him.  Zimmerman doesn't see him until after he has left the shelter of the awning and starts making his way home.


And here's a more complete layout of the area:

I've noted that Trayvon probably didn't take any short cuts, but returned through the main gate, he's new to the area, so he's more likely to stick to the route he saw in the family car.

It's noted that he could probably have made it home, from the timelines and possible speeds of movement. I'd note that kids reaction to danger is to run and hide, rather than to keep running, even if sustained running makes more sense.

Of course, if Trayvon somehow knew Zimmerman was armed, Trayvon wouldn't know the limitations of guns/distance/aim and such. TV and movies see to it that youths have an outsized fear of firearms. So it's unlikely he'd have known that distance would be his friend and a good defense, so he'd figure he's safer if he can hide. Unfortunately there's no where that's very good for hiding in that area. Although the area map shows several routes to avoid Zimmerman, Trayvon is new to the area and so, can't be sure where they lead.

Next there's the matter of Zimmerman's wounds. Without an inspection of them by a trained medical professional, we can't know whether or not they were fresh and/or open or old. The "wound" on the back of Zimmerman's head, could merely be a blood smear for example.

We do know that EMT's don't leave fresh, open and bleeding wounds without dressing them. But we also know that the ambulance sent for Zimmerman was canceled. At the station, people have opined that, Zimmerman's wounds may have been treated at the scene. But there's no evidence of that at all!

We can therefore speculate that; "what if Zimmerman's wounds were 'prepared' earlier"? That would be a very good reason for not letting an EMT anywhere near them, since even hour old wounds would not look fresh, open and still bleeding.
Zimmerman would also appear a frightening sight to Trayvon, if he was also wearing blood stains while holding that pistol on him.

I say that because, usually a victim will plead with his attacker "please don't shoot me", etc. But in this case Trayvon doesn't do that, as if there's no reason to believe that Zimmerman will hear a plea for mercy, so instead, Trayvon calls for the help of nearby others, even while he's under Zimmerman's gun!

Well these are just a few things to keep in mind when reading, because maybe some answers, or a way to find them might emerge. It always helps to know what one is looking for before one finds it, so that they don't just dismiss it as a useless artifact when it might be probative.