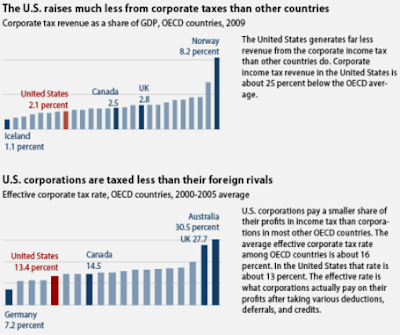 Republicans have been kvetching today about the fact that, as of Sunday, the U.S. will have the highest statutory corporate tax rate in the world following a scheduled cut in Japan’s corporate tax. “The United States is a world leader in countless ways. ‘World’s Highest Taxes’ is a title we shouldgive up as soon as possible,” wrote Sen. John Barrasso (R-WY) in a Fox News op-ed.


“This isn’t an April Fool’s Day joke; as of April 1, the United States of America will have reached the inauspicious position of having the highest corporate tax rate in the developed world,” said Sen. Orrin Hatch (R-UT) in a statement “I want America to be number one in many things, but having the highest corporate tax rate is definitely not one of them.”

This is constant refrain from Republicans, who then blame the supposedly high U.S. corporate tax rate for discouraging job creation. But as we’ve noted time and time again, while the U.S. has a high statutory corporate tax rate (meaning the rate on paper), U.S. corporations actually pay incredibly low taxes due to the ever-proliferating loopholes, credits, and deductions in the tax code and the use of overseas tax havens.
U.S. corporate taxes that were actually paid (the effective rate) fell to a 40 year low of 12.1 percent in fiscal year 2011, despite corporate profits rebounding to their pre-Great Recession heights. The U.S. both taxes its corporations less and raises less in revenue from corporate taxes than its foreign competitors:
READ MORE
Posted by Obwon at 3:52 PM