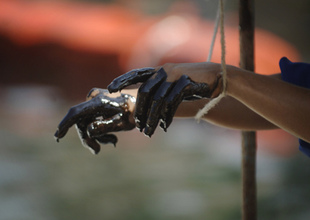 Think of this as taking fracking to the next level so that we can continue to speed along on our highway to hell -- peak oil, and the earth, be damned.
April 15, 2012


In a few short years the term “fracking” went from obscurity, mostly mistaken for an obscenity, to a household word, now often associated with flammable tap water. The technology is not new, but the market conditions that make such reckless forays deep into the earth’s crust profitable, are new. Welcome to the post peak oil energy economy. What’s online to follow fracking is even scarier.
The problem is we’re addicted to oil, and like most addicts, we can’t take that first step and admit our addiction. For over a century, we mostly glided, enjoying the high that cheap oil gave our economy and consumptive lifestyles, while not facing many consequences—at least none that we could yet recognize. But, like the meth-head whose body was rotting from the inside out, our addiction was poisoning our atmosphere, our oceans and in places, our land and fresh water. Now we’re seeing the results of that five generation-long binge. We’re also coming into a period that energy economists call “peak oil.”
READ MORE
Posted by Obwon at 4:04 PM