Did the Founders Hate Government? 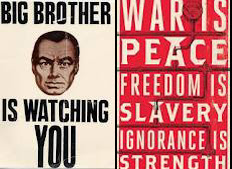 Orwell’s insight - that who controls the present controls the past, and who controls the past controls the future - could apply to the American political debate in which the Right has built a false narrative that enlists the Framers of the Constitution as enemies of a strong central government, writes Robert Parry.
In the coming months – with a new fight over the federal budget, the Supreme Court’s review of health-care reform and the November elections – the battle in the United States will pit not just political parties and economic ideologies against one another – but competing national narratives of how and why the United States was founded.

Indeed, it is that conflict over the American narrative that may well determine the outcome of the presidential election and the future direction of the United States. Yet, this dispute over the Founders’ vision is rarely debated in the mainstream news media.

The argument does, however, inspire right-wing groups which obsess over “strict construction” of the Constitution and the “originalist” intent of the Founders. Such references also have become standard fare on the Republican campaign trail with the four remaining major candidates claiming to be in this fight to defend American “liberty.”

On Saturday, for instance, ex-Sen. Rick Santorum declared that President Barack Obama’s health-care reform is “a threat to the very essence of who America is.” As the New York Times noted, “numbers like 1776 and 1860 increasingly pepper his speeches as he stresses the historical urgency of his candidacy.”
READ MORE