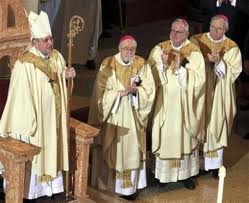 I guess I don't have to point out the obvious: That the same Catholic Church leaders who want to set themselves up as the moral referees of everyone else's private lives have quite a few planks sticking out of their own eyes and maybe it's time we pointed that out every time we have one of these "moral" arguments break out in the media:

The bankruptcy hearings for the Archdiocese of Milwaukee have revealed more than 8,000 previously unreported instances of alleged sexual abuse of children, according to one attorney representing the victims. The charges cover a span of 60 years and implicate a group of 100 alleged offenders, including nuns, church workers and some 75 priests.

At a press conference on the federal courthouse steps in Milwaukee, Peter Isley, director of the Survivors’ Network of Those Abused by Priests said, “This is a public safety crisis, a child safety crisis that needs to be investigated. We need to know who they are and where they are. How can there be 8,000 crimes committed by over 100 offenders and there be no accountability?” READ MORE