How to fight liberals: Imitate them 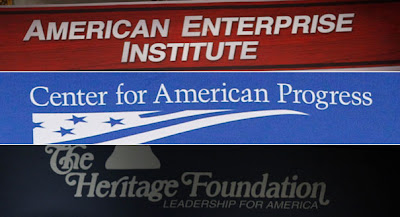 Impressed by the effectiveness of the liberal Center for American Progress, a group of conservative journalists and operatives are preparing to engage in their own sincerest form of flattery — launching an advocacy group with a similar name and mission but very different target.
Part assault on CAP and part homage, the Center for American Freedom’s goal is to wage a well-funded assault on the Obama White House and the liberal domination of partisan online media.

Based in Washington, it will have an annual budget of “several million dollars,” according to its chairman, Michael Goldfarb, and will house a new conservative online news outlet, the Washington Free Beacon, edited by former Weekly Standard writer Matthew Continetti. It will also include a campaign-style war room led by two former chiefs of the Republican National Committee’s vaunted research operation, and a media-monitoring shop that aims to do to MSNBC what Media Matters has done to Fox News.
“This is a fairly modest start-up that really hopes to combat the Center for American Progress and create something that in the not-so-distant future can be competitive,” said Goldfarb, 31, a former Weekly Standard writer who is now a partner in the lobbying firm Orion Strategies, where his clients include Charles and David Koch — liberal bugaboos and dominant funders of a range of conservative causes and politicians.