4 Polls That Show Occupy Wall Street is Just Getting Started 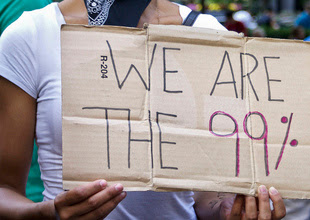 Is the increasingly popular movement poised to turn the tide of American history?


After over a month of demonstrations, numerous dismissals, and thousands of arrests, Occupy Wall Street is gaining momentum. Over the last two weeks, polls have poured in revealing that Americans familiar with the protests largely support them. And since that familiarity will continue to increase, we can only conclude that the country's support for the movement will keep on growing. When you've got NYT pundit Charles Blow unfurling his hipster flag comparing OWS to legendary 90s band Nirvana, you know a tipping point has been reached!

Recent polls prove that when Americans hear this band, they dig it.

Email ThisBlogThis!Share to TwitterShare to FacebookShare to Pinterest
Labels: OWS, polls, the 99%