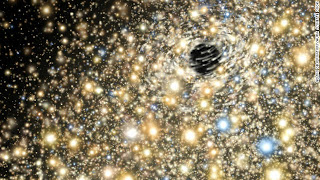 Stars move in the central regions of an elliptical galaxy that has a supermassive black hole, according to an artist's concept.

Black holes: They're the most destructive monsters in the universe. We already knew they can be powerfully massive. Now scientists say they've found the most massive ones yet, as reported in the journal Nature.

The mass of each is about 10 billion times the mass of our sun. The previous black hole record holder, first measured in 1977, has a mass of about 6 billion suns.

And for each black hole, the "event horizon" – basically areas from which nothing can escape their gravity – is about five times the distance between our sun and Pluto.
READ MORE
Posted by Obwon at 1:09 AM