Revolutions Don't Happen in a Day: 5 Ways OWS Can Stay Powerful and Truly Build a Movement 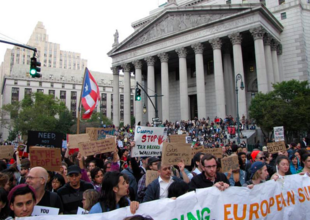 Social transformation means not only harnessing a moment, but building a movement.
December 21, 2011

On September 17, we took Liberty Square, used it to begin to create the social norms and institutions of a society to come, and became the Occupy movement. We hit the streets fiercely, abandoning the metal barricades they once contained us in, rejecting the marching permits they offered us, refusing their sidewalks. We were dragged -- handcuffed -- into the front pages of people’s minds, and brought with us a story many were trying to silence; a story about the massive profits made by the tiny few through the exploitation of the many, a story about deep and systemic economic, political and social injustice. We danced in the streets and parks we reclaimed, and then in the jail cells they took us to when they realized we weren’t going home. We were confident, invincible; it’s hard to be afraid when the sun is out. READ MORE
Posted by Obwon at 2:19 PM