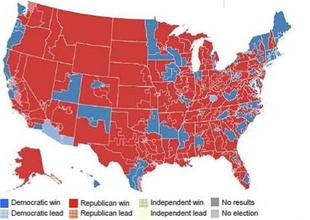 Even as the movement's grip tightens on the GOP, its influence is melting away across vast swaths of America, thanks to centuries-old regional traditions.
November 29, 2011

When 2011 began, the Tea Party movement had reason to think it had seized control of Maine. Their candidate, Paul LePage, the manager of a chain of scrappy surplus-and-salvage stores, had won the governor’s mansion on a promise to slash taxes, regulations, spending, and social services. Republicans had captured both houses of the state legislature for the first time in decades, to the surprise of the party’s leaders themselves. Tea Party sympathizers had taken over the GOP state convention, rewriting the party’s platform to demand the closure of the borders, the elimination of the Federal Reserve and the U.S. Department of Education, a prohibition on stimulus spending, a “return to the principles of Austrian Economics,” and a prohibition on “any participation in efforts to create a one world government.” A land developer had been put in charge of environmental protection, a Tea Party activist was made economic development chief, and corporate lobbyists served as the governor’s key advisers. A northern New England state’s rather liberal Democrats and notoriously moderate Republican establishment had been vanquished.

Or so they thought. READ MORE
Posted by Obwon at 5:35 AM