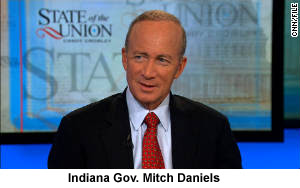 (CNN) -- Indiana's state government has discovered $320 million in funds it didn't know it had, money that officials stumbled across while enacting statewide belt-tightening measures.

During a press conference Tuesday, Daniels cited a "programming omission" and modernized tax collection processes for unearthing the $320 million in corporate tax revenue. That money had been accumulating since 2007, but hadn't been accounted for in the state's operating budget.
READ MORE
Posted by Obwon at 10:14 AM