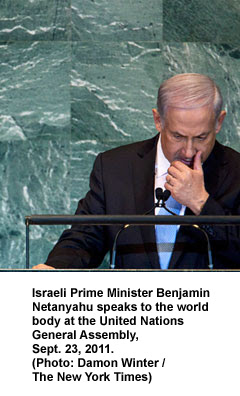 Israel today faces one of the greatest threats to its existence. No, I'm not referring to Iran, nor the Palestinians, Egypt or Syria. The threat comes from within.

The Israeli Knesset has either approved or is considering a raft of legislation that would fundamentally change the democratic character of the state of Israel. It has already passed a law which would criminalize public support for the Boycott Divestment Sanctions (BDS) movement. Other bills would prohibit foreign funding of Israeli nongovernmental organizations (NGOs), declare Israel to be a Jewish state, remove Arabic as one of the country's national languages, dramatically increase penalties in libel suits and allow plaintiffs to recover without having to prove damages, make online publishers liable for comments published at their blogs or web sites, and force Internet service providers (ISPs) to reveal personal information about such commenters to the police.
READ MORE
Posted by Obwon at 7:49 AM