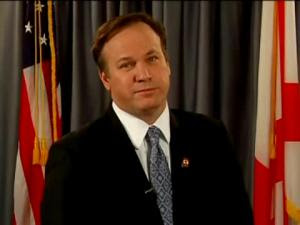 Bill Johnson is a Republican Christian politician who was a former Birmingham City councilman and director of Alabama’s Department of Economic and Community Affairs until he resign to run for governor. That wasn’t his first run – he ran for the U.S. Senate in Missouri as a Libertarian, campaigning to legalize marijuana and prostitution – views he’s since renounced since he became a Republican. Still, he’s got this odd streak of idealism that has made it difficult for him to fit into the GOP stable – after he fell out with Republican Gov. Bob Riley by asking the state attorney general and the Montgomery County DA to investigate his former boss for conflict of interest, he was banned by the GOP from appearing before the executive committee in Prattsville, his home county, or speaking at any other event the committee sponsors. READ MORE
Posted by Obwon at 11:48 AM