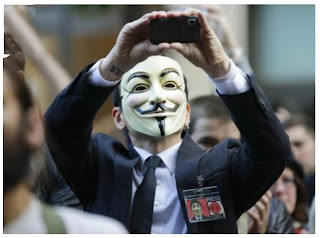 NEW YORK – Look at a photo or news clip from around the world of Occupy protesters and you'll likely spot a handful of people wearing masks of a cartoon-like man with a pointy beard, closed-mouth smile and mysterious eyes.

The mask is a stylized version of Guy Fawkes, an Englishman who tried to bomb the British Parliament on Nov. 5, 1605.

"They're very meaningful masks," said Alexandra Ricciardelli, who was rolling cigarettes on a table outside her tent in New York's Zuccotti Park two days before the anniversary of Fawkes' failed bombing attempt.

Here's an avatar for you or
just use it in your OWS postings: