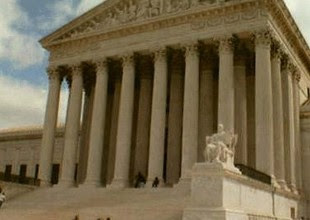 Corrupt, right-wing Supreme Court justices are abusing their power, fraternizing with the Koch brothers and fixing elections (among other horrors).
August 5, 2011

Bill Watterson is Mark Twain--with a drawing pen. He is a master cartoonist, but also a sharp-witted observer of the absurd, with an impish sense of humor. From 1985-1995, Watterson penned "Calvin and Hobbes," the truly marvelous comic strip that featured six-year-old Calvin and his stuffed tiger Hobbes. In Calvin's inventive and iconoclastic mind, Hobbes was a genuine tiger (and his best friend) and they shared boundless adventures that challenged conventional thinking and defied authority, often crashing right through the prescribed social order of the 'real' world.
READ MORE
Posted by Obwon at 3:46 AM