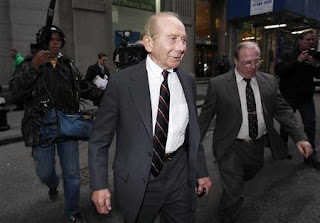 The lawsuit marks an unusual effort to force the government to pay shareholders, who have seen AIG's stock price tumble 98 percent since the middle of 2007, when the insurer's risky bets on mortgage debt through credit default swaps began to falter.

Greenberg's company, Starr International Co, also filed a lawsuit against the Federal Reserve Bank of New York, whose president at the time of the takeover was Timothy Geithner, now U.S. Treasury Secretary.

Once AIG's largest shareholder, Starr said the government took a roughly 80 percent stake in AIG and charged an "punitive" 14.5 percent on federal loans without seeking a shareholder vote, hoping to provide a "backdoor bailout" for AIG trading partners such as Goldman Sachs Group Inc. READ MORE
Posted by Obwon at 6:04 AM