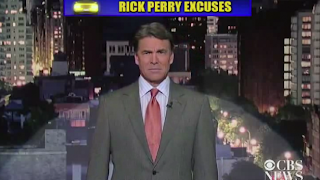 After a string of high profile failures the likes of which are rarely seen in presidential-level politics, Texas Gov. Rick Perry issued a rare debate challenge on Wednesday to a politician he’s not even running against: House Minority Leader Nancy Pelosi (D-CA).

Perry, notorious in his own state for avoiding debates with strong Democratic challengers, sent an open letter to Pelosi on Wednesday, offering to debate his own plan to reformat Washington, D.C., “versus the congressional status quo.” READ MORE
Posted by Obwon at 2:37 PM