The End of the Herman Cain Campaign? (It's Not What You Think) 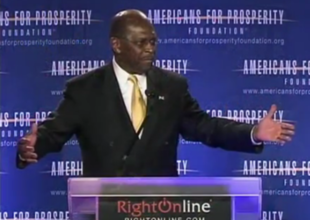 In a hallway outside the ballroom in the National Press Club, a mustachioed man looked ill at ease as he was mobbed by reporters asking questions about sexual harassment allegations made against his boss, GOP presidential hopeful Herman Cain, on the Politico Web site the night before.

Mark Block, whose face is now familiar to thousands as the Smoking Man in the Cain campaign's latest video, told reporters that Cain was unaware of any settlements paid to the two women who made the accusations while Cain served as president and CEO of the National Restaurant Association, as Politico reported. But the reasons for Block's discomfort likely went beyond Cain's situation to his own.
READ MORE
Posted by Obwon at 11:09 AM

It isn't easy being the front-runner--suddenly your whole operation, your personal past, everything is under scrutiny. Herman Cain is the latest candidate in the hot seat.

After the allegations of "inappropriate behavior" in his past that may qualify as sexual harassment which rocked his campaign yesterday, Herman Cain is in defense mode, denying the reports and blaming the liberal media for their circulation.

That's so absurd on the face of it. Apparently the story came from
either the Perry or the Romney campaigns, either one hardly the liberal
media.

It's the old cold war addage: "The enemy of my enemy is my friend".

He has no chance since his party has been on a "race to the bottom" for way too many years. Pity that on their way down they managed to take the nation with them.
Now the top positions of the GOP are slime filled, while in the Democratic party, the cream rises. This makes the parties opposites and unfortunately opposites attract.

The vote no longer works as it should, it's been neutered. So OWS is the only leverage we have left. Being free of any list of demands, any ideology save "we demand that the government return to governing on behalf of all, instead of the few", means that it's a reasonable movement for all to join, if they want the return of Constitutional law.

The few cretins in office around the nation and the world, who think that breaking heads will stop the movement, have some very hard lessons to learn. They are revealing themselves, for all to see, as enemies of their people.

As we look around the world we see that the state of each nation, is the result of how it's been governed over time. This allows us to distinguish on a world wide scale between, which forms of government enable the most people -- and therefore the whole nation -- to prosper, from those which do not.
---